On a lovely warm day in September Helen one of Studentcirlce lettings accounts assistant and her friend Jill and took to the hills and paths around Stonehenge to raise money for the Alzheimer’s Society.

The trek started at Old Sarum, the site of an Iron Age hillfort dating back to 400BC and a Royal Castle which was built in 1076.  After an encouraging talk from the local mayor, a bacon butty and a few warm up exercises off they went. 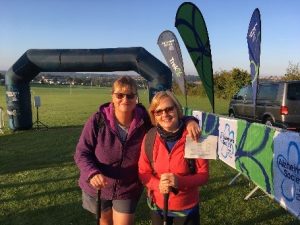 Everyone started off at a really fast pace and initially the terrain was grass and woodlands. They soon passed through the City of Salisbury skirting round the cathedral and passing some lovely old cottages along the way.

The first water stop at 6 miles was a bit of a surprise which was nice! After having a quick drink and snack they got going again and soon found the trek become much hillier, and it was getting much hotter as they headed towards midday. The next stop was at 14 miles and this was where they were to stop for lunch. The 8 miles seemed to take a lot longer as they had slowed down a bit due to the hills and the heat!

When they finally got there the lunch stop was in a lovely setting beside a river. They sat down ready for some welcome food and took our trainers off to give our feet a break.

The next stop was at 20 miles and they covered a lot of fields and more hills! They skirted Stonehenge which was a little further away than expected but still a lovely sight. By now some of the participants who were doing the half marathon distance were adding to our numbers.

The terrain was quite mixed with a very steep section up stone steps at one point – sadly at this point one of the half marathoners had been overcome by exhaustion and the doctor had been called for.

There was a lot of farmland and at one point they passed through the middle of pigs of all sizes in open areas either side of the path – some of them were very tiny! This was quite hard going as the terrain was loose shale underfoot making it hard to walk at a good pace and they felt they had to watch there footing the whole time – They were pretty tired by this point.

Discover Adventure (the company who run the event for Alzheimer’s) had set up a further water stop at 24 miles which was welcome even though they daren’t stop too long as the end was now in sight!

They made it – having walked a distance of 26 miles in just over 9 hours and were greeted with a welcome glass of Prosecco.

Feeling tired but pleased to have finished – helen and her friend Jill have taken part in a few marathon treks arranged by Discover Adventure including trekking over the Seven Sisters on the South Downs Challenge and this was definitely the most challenging!

They raised £703 between them having hosted a coffee and cake morning, an afternoon tea and a Spanish evening – people are always happy to pay for food! Some people who couldn’t attend donated anyway – it seems like everyone knows someone with Alzheimer’s and we were proud to support such a good cause.